In support of its mission to preserve Texas Jewish history, the Texas Jewish Historical Society has provided financial grants for the restoration efforts of historic synagogues and temples in Texas.  Below are examples of this work. 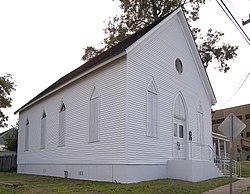 Synagogue B’nai Abraham, built in Brenham, Texas, in 1893, is the oldest Orthodox Jewish synagogue in Texas having been in continuous use.  In 1990 the building received historic designation by the Texas Historical Commission and the National Register of Historic Places. Its Gothic-Revival architecture reflects the simple style of country churches in the region, with white clapboard siding and pointed arched windows  Due to its dwindling congregation, in 2015 the synagogue building was fully relocated to the Dell Jewish Community Center in Austin, Texas, where it has become the home of the Congregation Tiferet Israel.  The Texas Jewish Historical Society contributed financial support for the relocation and restoration of the synagogue.

Temple Beth-El, built in Corsicana, Texas, in 1898, served a Reform Jewish congregation.  Declared a Texas Landmark in 1981 by the Texas Historical Commission, the Moorish-Revival wood-frame building has clapboard siding, keyhole windows in the front doors, and a pair of octagonal towers topped by onion domes.  Temple Beth-El closed in 1980, and the building was donated to the City of Corsicana as a community center.  Jewish religious services continue to be held monthly.  The Texas Jewish Historical Society contributed financial support in 2017 for building restoration. 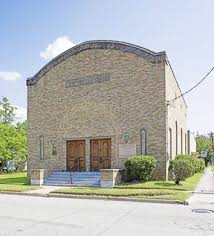 Synagogue K’Nesseth Israel, built in Baytown, Texas, in 1930, was declared a Texas Historic Building in 1992. The building design was influenced by a visit of Houston architect Lenard Gabert to the Touro Synagogue in Newport, R.I., the first synagogue in the United States, built in 1763.  Synagogue K’Nesseth Israel was severely damaged by Hurricane Harvey in August 2017.  The small congregation launched a fund-raising campaign to successfully restore the synagogue.  The Texas Jewish Historical Society contributed financial support for the building’s restoration during 2018-2019.